An appropriate song to listen to as you read my next installment of my journey to the end of Son Doong – got to love a bit of Status Quo.

The men of the group snored very loudly on the second night in camp 1 and although Captain Caveman had one of the best spots for our tent, I was very tired on the third day. Some of the ladies in the team were doing a few yoga stretches before breakfast but the most I’d managed was standing on one leg to put my wet trainers on. Captain Caveman had said that other groups often found day 2 the hardest so day 3 would be easier and was the day we would reach the end and depths of the Son Doong cave.
We started the day with lots of steep, rocky climbs, first up and then down, we had lunch at the infamous doline 1. This in itself was beautiful but made me nervous due to the definition of a doline being where the roof of the cave has fallen in and so is exposing the sky. I had lots of questions about being trapped and falling rocks that nobody else seemed to be concerned about. We were lucky to see sunbeams coming through the doline and we were also treated to more yoga poses from the ladies who took up various tricky stances for the photos. The level of yoga was too advanced for me so I tucked into a chocolate bar (yes we were given KitKats) and watched from afar. Meanwhile Captain Caveman was up a huge stalagmite doing a time lapse video on his camera phone. I needed the loo and to my amazement there was an actual man-made toilet around the corner and over some calcite rocks. 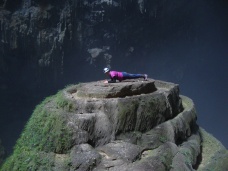 Me, planking
We walked more and for some of it over grippy rock but on steep paths, we saw cave pearls and encountered more slippery rocks that really were not my friends. By this time my bruises were black and I was desperate and determined to finish this expedition. We stopped at the edge of a cliff and could see our next campsite below us, after another lot of scrambling over the rocks we reached camp 2. The assistant guide had a cup of tea ready for me, our tent was again in a great spot on what felt like a soft sandy beach and I started to take off my trainers.

Day 3 did not end there, as Captain Caveman reminded me to keep my shoes on and grab stuff for washing, we were off to the lake. We were fortunate that it was early in the season as the lake dries up and leaves a big muddy area in front of the Great Wall of Vietnam (the end of the cave passage). I hate mud and love water so although I was tired I was up for this bit – how hard could it be to paddle in a boat across a lake, see the Great Wall, paddle back and then have a wash at the edge of the lake.
This was one of the scariest sections of the tour; first we walked for an hour through sand then more rocks and got to the boats which were as big as bathtubs and very unstable. I had the best rower (Captain Caveman had rowed a lot in his youth) but it was pitch black and huge. I cried and sat as still as possible so we didn’t tip over and Captain Caveman had the camera on filming me as we finally made it to the end and I touched the rope attached to the Great Wall, which could be used as an emergency exit. We got back to where we got in the boat so the next few people could go in and we had a wash and I washed my hair before walking back, getting dirty and sweaty again. At Camp 2 I was overwhelmed that I’d done it and had tears of joy followed by fear that tomorrow we would reverse the trek to get out. That night I decided to celebrate with a couple of nips of vile tasting rice wine and I thought of how good a beer would taste instead.

One thought on “My Hang Son Doong Experience – Day 3”