Our Tu Lan Cave Encounter started at 7:35am on Tuesday 16th July when Kien, our guide picked us up from our house. We had not had time for any breakfast and we were the first of 7 more customers to pick up.
By 8:30am we were off to Tu Lan office where there were already groups having briefings. We were given a 10 minute break to stretch our legs while we waited for a table and I got changed in to my trekking gear and Captain Caveman packed our stuff in to one bag. Unlike other days recently there was absolutely no breeze and we didn’t set off walking until 11am of day 1. I also didn’t take my new phone as I didn’t want to break it and asked Captain Caveman if he would take some photos of our trip and share them. 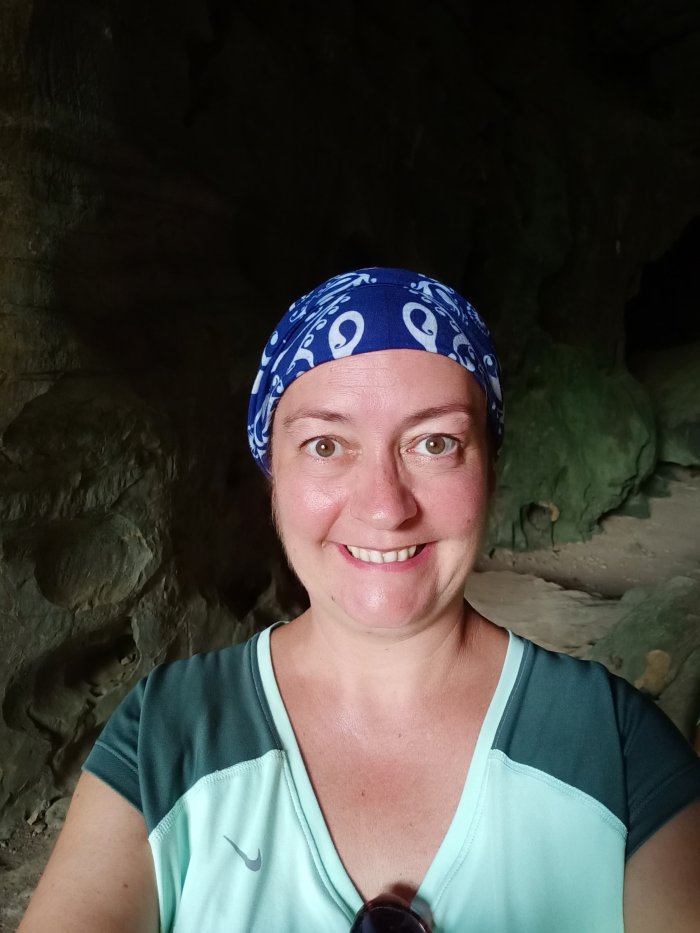 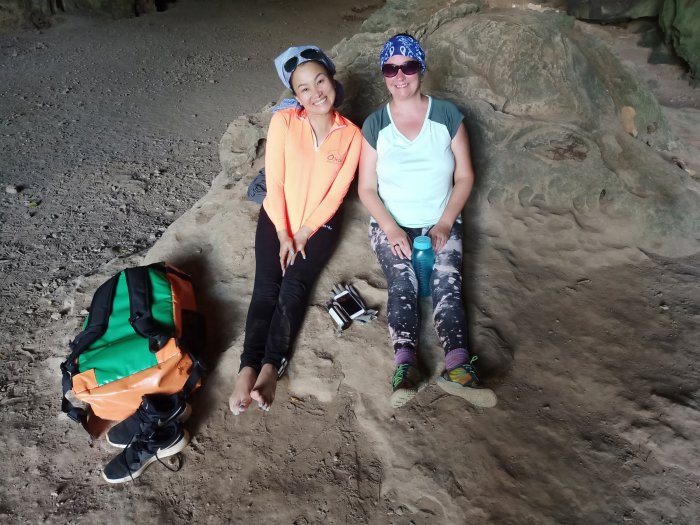 The first bit of walking was relatively easy except for the sun beating down and the sweat pouring off us. After just over an hour we stopped for lunch in Ton Cave and I ate rice rolls with tofu, Laughing Cow cheese, lettuce and chicken followed by a couple of bananas for some energy.
After lunch we walked back out of the cave and over a big mountain towards Tu Lan Valley and it was quite tricky, even though I had done the Tu Lan 4 day trip before. For an AC loving office monkey it was challenging and I began to wonder if I should have come – it was definitely not easy for me in this heat and humidity. On arriving at our campsite we all went to the water to cool off, Captain Caveman was already in the larger pool with a waterfall, Lien joined me in the river. After a break where we were treated to homemade crisps we put on our helmets, lights and a life jacket so we could go and explore Ken cave. At this point I was ready for bed, Lien also was flagging but she had the excuse that she’d arrived that morning from Hanoi on a sleeper bus. Luckily she kept me going and she never stopped talking, even when we did the swimming part. I actually enjoyed the swimming much better however I was petrified of the bats which flew in front of our lights to feed on the moths – I even ignored Kien and turned my light off hoping the bats wouldn’t be as close to me.
I used all of our bug spray on the first night as Tu Lan had loads of mozzies – they liked me but they loved the Spanish girl and one of the Dutch boys even more (including our faces).
Dinner was fantastic and I could eat all but one of the 7 dishes, 4 of which were veggie/vegan and I ate loads of it. We even had rambutans for afters, which I love.
By 8pm dinner was done and the first few had gone to their tents. Captain Caveman, the Spanish guy and the Greek guy finished the rice wine while talking about caves for a bit longer and then we went to bed.
The tent, which I shared with Captain Caveman, was roomier than I expected and not too uncomfy. I finally fell asleep but there was a huge rain storm during the night – I hoped it meant a cooler second day of the tour.

On Wednesday 17th July Captain Caveman and I woke up at 7.30am in a tent in Tu Lan campsite. I got dressed in to fresh clothes and went to join for breakfast but could hardly walk – I felt like I had been kicked by a large horse. We had ordered our breakfast the night before and the usual choices for everyone was pancakes or instant noodles, both of which aren’t gluten free so Kien had a special meal for me – beef fried rice. I was very hungry and I was really looking forward to my food but unfortunately it contained chilli sauce and was far too spicy. I checked with Kien and he said there was definitely no chillies in so I tried another mouthful but couldn’t eat it at all – instead I had a banana and a sweet ginger tea.
After breakfast we donned our helmets, lights and lifejackets and crossed the small river heading in to the Tu Lan Cave system. The morning consisted of a bit of swimming, some trekking and a bit of squeezing through a rocky section which we had to climb up. I was terrible at it and really struggled to work out where to put my hands and feet – I had my Merrill’s on but they were still slippy and I could not get my legs to stretch or bend in to some of the positions other people could. I had a bit of a claustrophobic melt down at Tu Lan Cave and Captain Caveman wasn’t too impressed especially as he kept reminding me I had been here before (I hadn’t been that particular way though).
We visited Ken cave which was ok for me as there was a lot more swimming, which I was good at. We trekked up and down a bit more before we got to the Hung Ton Valley where we would set up for lunch. I was shaking and felt weak so I was very much looking forward to lunch which we had at a gorgeous little spot sat in the river. There were already 2 other groups at the same spot so we put a table in the river and ate while our feet sat in the flowing water.
I greedily snaffled 3 spring rolls and 4 pieces of mango but it did mean someone didn’t have as many spring rolls – they were fantastic and I could easily have eaten more. The others also had boiled eggs (which I don’t like), Oreo biscuits and Choco pie chocolate biscuits. Everyone had coffee too to give them some extra energy, apart from me and the Spanish girl.
After lunch Kien told the group we would be exiting a cave via a ladder which we would be clipped on to a rope to do, I’d done this before on the Tu Lan 4 day trip and wasn’t looking forward to it. I’d not seen it on the itinerary either but some of the other customers and Captain Caveman asked if we could swim out instead so Kien agreed. It was much better than I expected and I actually enjoyed swimming and floating on my back through Ton cave.
When we got back to the easy part of the walk back to the Oxalis office I didn’t see the rest of our group for dust. It was fairly cloudy and so not as hot as on the way in. Kien was at the front with the fittest of the group while Captain Caveman was at the back with me, Lien and Hoa (one of the guides/porters).
When I eventually got back to camp I had a shower using my Lush toffee shampoo bar which is still lasting well – it felt great and I was relieved to be back.
When I got back to the others we went over to a small cafe for some rice noodle and beef soup. That bun bo felt like the best I’d ever had, I was so hungry and I even had a warm beer to wash it down with.
The drive back was long and we got dropped off at our house where I could hardly get up the stairs and went to try to have a little sleep but couldn’t. Looking back I should’ve been a little bit more prepared in my fitness, especially as I thought it would be easier than it was. 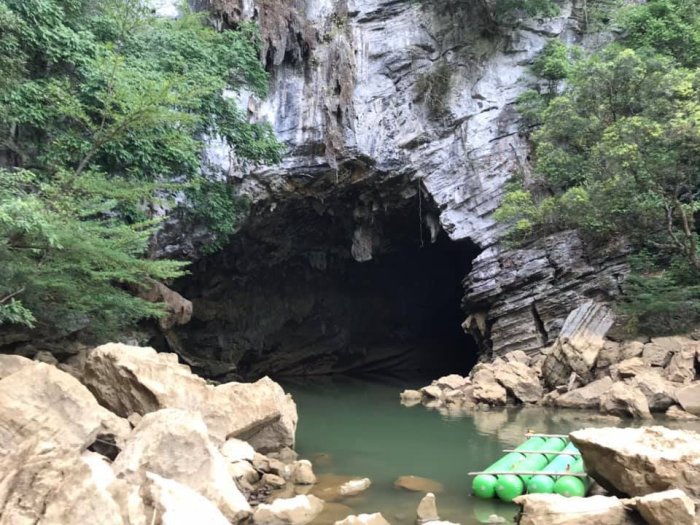 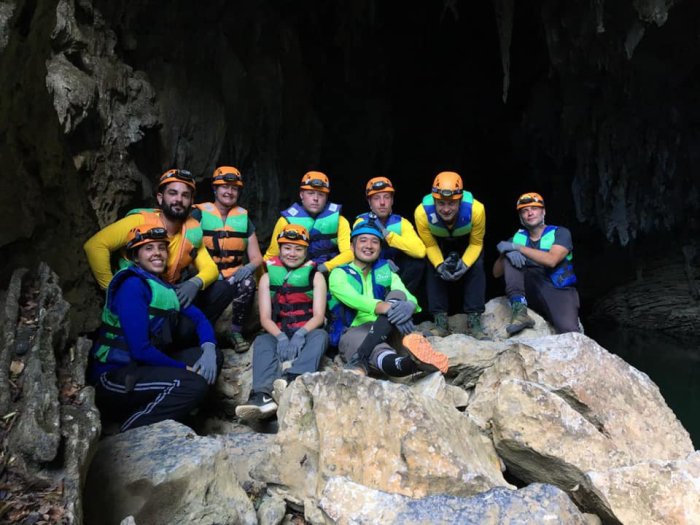 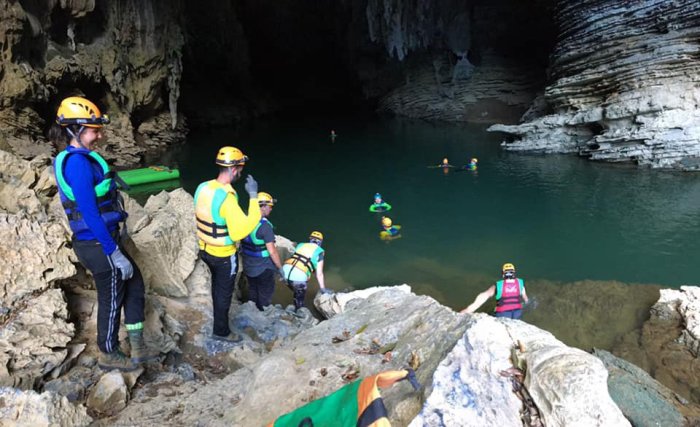 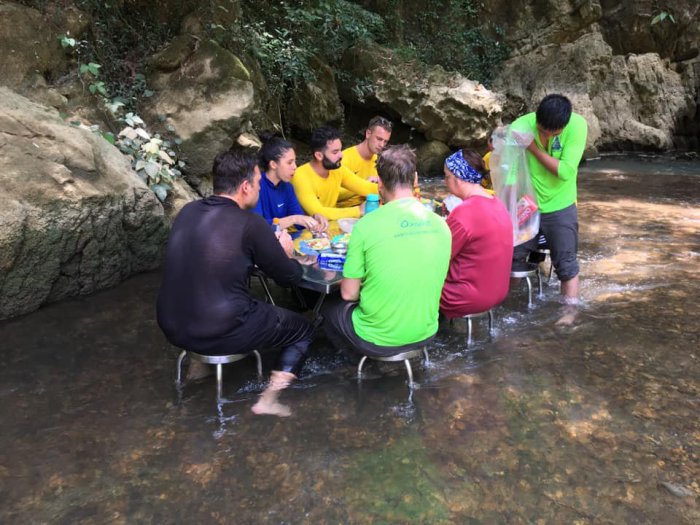