Monday 27th January was the third day of the Tet holiday and we had 4 parties booked in, between 8:30am and 5pm. I hadn’t slept much but I was convinced I should be getting better now and decided I would wrap up warm and attend Mr Nguyen’s house to celebrate with the caving lot. We were served green tea which I welcomed and even drank spare ones, there were some menthol sweets on offer which were like a miracle cure and I shoved them in. Hieu and Hoan hosted us well and brought out so much food and drink and were so generous to us all. Banh tet is one of my favourite dishes so I managed several pieces – it’s rice with pork in the middle and made into a sticky roll then deep fried.
In the afternoon, while everyone went to Sexy Quang’s, Landlord Phuong’s and Happy Hoa’s I stayed home and decided to have a tidy out of my possessions which were still here from last year. Having watched a Marie Kondo series on Netflix I was into the methodology and had already started to store things better. I’d also been following posts from my friends decluttering business which made it easier for me to be tidy and a bit more minimal in some ways.
In the evening it had dawned on me that I had cabin fever and so I joined in a meal at Namaste with Captain Caveman and friends – I even had some wine and sodas and bought some local cough/throat sweets which were like menthol Werther’s originals. 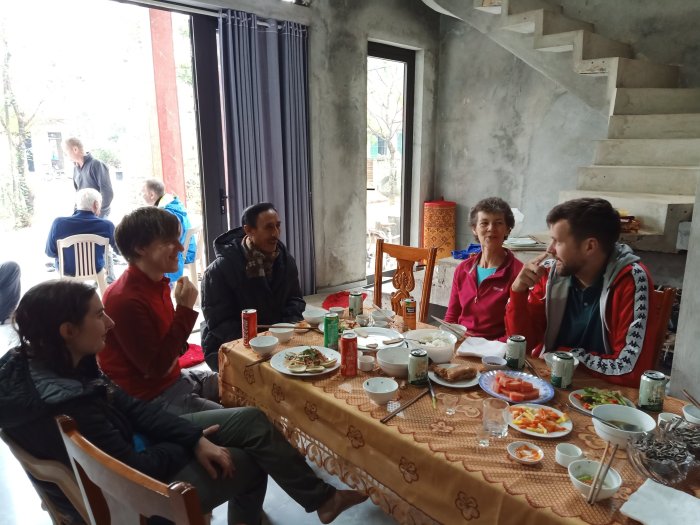 The 4th day of Tet fell on Tuesday 28th January and it was a fairly quiet day for me. I joined Captain Caveman and friends at Coffee Station where I had a smoothie bowl, without the granola, for breakfast. Later I rested in bed and just had crisps for lunch but went to The Villas for Happy Hour and a Half and dinner. I love the margaritas there and the free popcorn – who can resist a happy hour too! For dinner we shared a bottle of red and I had one of my favourite dishes again, the confit duck leg. The meal is 180,000 vnd, is tasty and filling too – less than £6 in English money is pretty good value. Back home Tatas came back for a drink and we opened a nice wine we had been saving – it wasn’t that nice though!

The last day of the Tet holidays, Wednesday 29th January, and Tatas was going to be on TV at 7am so we had all assembled at Ho Khanh’s to watch the show. I had my gluten free cornflakes and a ginger tea, Josh tried to get the TV working and Tatas didn’t make it as she had to go on tour at the last minute. When we finally got the TV working it turned out they didn’t have that channel anyway.
For lunch it was a local affair at Phong Nha Vegan where I had mushroom porridge and fresh spring rolls. We also said goodbye to Dan as he left to return to the UK for a bit. In the evening Captain Caveman and I went to Phong Nha Underground early-ish because he wasn’t feeling well either. I doubled up on herbal teas and lime juice, had a lovely pork dish for main while Captain Caveman ate pasta, then went home to bed. I waited for Tatas and she ate a taco and I had hummus with carrot sticks – no alcohol though!

On Thursday 30th January we had breakfast at Oxalis, it’s not the best pho ga in town but it does the trick and the ginger tea is good.
I rested up again and just had snacks for lunch but later we had dinner at Capture, I had a breakfast because you can order it at any time and their bacon is the best in town. Captain Caveman had his first Son Doong briefing that night and wasn’t sure he would come out afterwards so Josh and I went to Momma D’s where we met a lovely couple from Rugby, Angela and Nick.