Today’s song choice is from a band I went to see 10 years ago and reminds me of my Abandoned Valley day tour in 2016. As Thursdays are now often used for ‘throw back Thursday’ posts and pictures I thought it appropriate (plus I’ve been to so many parties recently I was too hungover to write much today).

Last March I went on to a one day tour with Jungle Boss tours, here in Phong Nha and I thought the Abandoned Valley trip was amazing despite me being more of a city girl than the active sort. I was due to go on another caving trip in a few days time so this would be a warm up to get my legs used to all the walking. It was hard and I regretted wearing my new Salomon grippy shoes as they were hurting my toes on the way down the massive winding, rocky hill to the valley of the jungle – the thick greenery and the steep rocky walk was like something from another world for me. We had snacks of dragon fruit and choco-pies (like wagon wheels) after almost 2 hours of trekking before donning helmets, lights and gloves for a scramble over rocks into Dark Cave. It was a total of about 700m in pitch black and we even sat at the end of the cave and turned our lights off and sat in silence for 5 minutes to get a sense of the nature around us. (Yes, I was scared but after a while just relaxed and it felt weird).

Getting ready for a swim 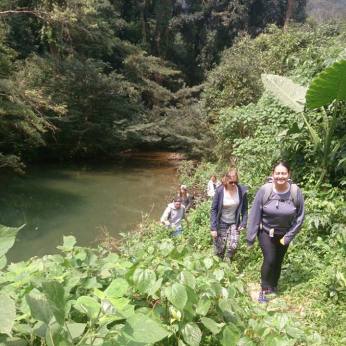 Trekking through the green valley

Swimming out of the cave
There were 8 of us on the trip and of course I was the fattest, slowest, unfittest and oldest. The others were 2 Americans, 3 Germans & 2 Dutch and I made friends with Janou and Emma, the Dutch girls, who were fantastic trekking buddies. The guide was my good friend, Uy, and there were a couple of porters and a national park ranger.
After dark cave we walked along the river going in and out of it to cross the trails – the German man by this time had stopped removing his white plimsoles and rolling his jeans up.
We stopped for a delicious BBQ pork lunch in the jungle next to a swimming spot and although the sun wasn’t out it was warm and the area was beautiful.
After lunch we swam in a very cold pool that lead into a massive cave so we swam with lights on to the end, about 200m and floated on our backs in the dark. I wasn’t so keen on the bats in there but it was a nice swim.
Afterwards we set back off trekking up the massive hill back to meet the bus. I was shattered but had a good laugh and was wishing I had ordered beer, not 7up, for my drink at the end.
In the evening I ate with my new friends at Bamboo Café before heading across the road to get drunk at Easy Tiger’s with Uy and some of my fellow customers from our tour. The night ended in the karaoke til very late, singing to random songs that most of us didn’t know.