I arrived in Turkey on 5th September after a change of flight from Hanoi. I had booked an earlier flight and decided to not use the one I had booked for 4 days later with a lengthy layover in Jeddah. It was a bit sunny on my first morning in Dalyan but not as hot as I was expecting – it was also quiet as I walked along the river. I was planning to stay a while in Captain Caveman’s apartment near the town centre of Dalyan, where he would join me in about 6 weeks time.
The first person I bumped in to was Captain Turgay, who was at his boat getting ready for a day trip on the water. I had already booked him for a surprise birthday celebration for a friend’s 40th the week after and so we chatted about that. I had a mint tea and a vanilla milkshake at Dalyano so that I could use the internet to let people know I had arrived in Dalyan.
Still tired, I found a Turkish breakfast at Lukka bar, where I confused the waiter by ordering it without bread, eggs, cheese rolls, tomato and cucumber and it was pretty good! I stocked up with essentials at the corner shop and went to get unpacked and start the washing. I decided to have a quiet meal at Adilan where I really enjoyed the stuffed mushrooms and a chicken shish. Plans changed quickly when a friend went past on her bicycle and we ended up having quite a few drinks before going to Lukka and Jazz bar! 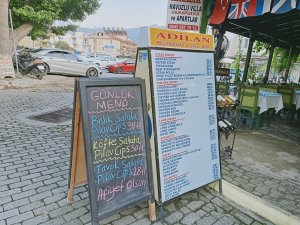 On Friday 6th September I would finally be seeing my parents again, after quite a long time. I’d last seen my mom in Turkey about 11 months ago but I’d not seen my dad for about 14 months, back in England. We had agreed to meet for breakfast and they would message me when they were up. I was awake from 7am (11am Vietnamese time) with a hangover and no recollection of saying bye to anyone last night.
I waited for the message and drank loads of water, trying to sort myself out as I felt terrible and had a really bad stomach.
We went to Jiks for breakfast around 10:30am where we all went for the English versions, it was great to see them and afterwards we stocked up on provisions and went back home for a rest.
In the afternoon we had a couple of drinks at Amy’s bar, where I managed two ciders and then in the evening we had our first family meal at one of our favourites, Bistro Blue. My chicken casserole was so big that I took some home and we had a good first night together drinking wine too.

In Dalyan there is a weekly market so on Saturday 7th September I went there with my parents while they stocked up on fresh veg, salad, fruit and cheese. I decided not to buy food as I was looking forward to eating out over the next few days/weeks.
It was a fairly relaxed, sunny day and I started reading a new book, which my mom had brought for me. I used to read a lot but had not read a book for about a year and was really looking forward to getting back in to it now that I would have some free time. The cleaners had been to the apartment and it was looking clean and tidy – it was nice to be back in Dalyan.
I received photos and messages from people in Phong Nha, Vietnam, to say it was sunny again and the water levels were down. This was good news as it was Captain Caveman’s last day in Phong Nha before he left for his adventures.
In the evening I joined my parents at Pamukkale restaurant for a lovely meal – I had stuffed mushrooms and a chicken shish, both very tasty.

Sunday 8th September was a very memorable day!!! It was such a good one that I forgot to take any photos, which is unlike me. I had shop bought gluten free bread (toasted) and lurpak butter for my breakfast and it was the first time I’d had it in 10 months. A friend had invited us to Sunday lunch at Lukka bar and despite me not being able to have the Yorkshire pudding, gravy or cauliflower cheese I really enjoyed my chicken version. My parents and fellow diners had the beef, which looked amazing. I also managed 4 glasses of white wine and a trip to Jiks – it was really good to just spend time chatting with the folks for a change (I was even laughing at Dad’s jokes).