I do love a bit of dragon fruit so on Monday 3rd February my week started with a whole one for breakfast, along with a woolly head and an annoying cough but I had slept in until 7am. It was a lovely sunny day so after a few chores at home I went to lunch with Josh and Tatas. We decided to try another new place along the river side called Google House which had been open a while but had made some improvements to make it look attractive at the water’s edge.
Josh and I got there first and decided to venture down the steep makeshift steps to the seated area, we joked that we were lucky to both be wearing porter sandals as he helped me on the last bit. The joke seemed much funnier when Tatas arrived in more fashionable footwear which were not ideal for the gradient. I decided I would order a beer and french fries, Josh had pop and veggie noodles with chilli sauce and Tatas had a beef noodle soup with a soft drink. It was a lovely setting, the food was cheap and worth a lunchtime visit and I thought the ‘proper’ chips were good. There was a seat in the river which Josh posed on for some photos and we definitely got back up to the road easier than I got down – I made a note not to attempt it when drunk.
Back home Captain Caveman came back from Son Doong and was hungry so all four of us went to Capture for a second lunch (or first dinner, depending on how you see it). While Josh maintained his no alcohol rule the rest of us shared a bottle of our favourite red wine, Santa Digna. The boys had pizza, I had a cheese board (no bread) and Tatas had peanut butter with toast. I was a bit envious of their meals – how I miss being able to eat food like that!
At 5.30pm we left Josh and got a lift to Chay Lap where Captain Caveman was having his end of tour Gala dinner while Tatas and I sat at the bar with margaritas. I had a mushroom curry with rice which was excellent and Tatas had a satisfactory spaghetti bolognese. We had a good night and were home for a reasonable hour too. Captain Caveman had the next day off so we had a little outing planned.

There’s a filmmaker in town so on Tuesday 4th February he had a car booked to go from his homestay, Lucky Lucky, to Phong Nha Farmstay and me, Tatas and Captain Caveman had cadged a lift. Firstly we went to Coffee Station for breakfast where I had bacon, beans and cheese with a fruit smoothie. I also got to pet the owner’s dog who is so cute.
It was a warm day but the sky looked like it might rain and so I didn’t bother taking my swimmers but that turned out to be bad idea. I was still guzzling ginger tea down me like I really believed it would cure my cough and I ordered the fresh spring rolls for lunch. Captain Caveman had pizza again and Tatas had the same as me but with chillies. The food was well presented and really tasty and we said we would come visit again and maybe even stay over. The owner, Ben, gave us each a VIP card which gives a sticker for every 100,000vnd spent at three venues (Farmstay, The Villas and Capture). A full card can then be redeemed for 300,000vnd at the Farmstay – wonderful. The poolside WC has the most amazing views of the rice paddies, in fact I can’t think of a better view from being sat on the toilet (there’s no photo of it, it needs to be experienced).
In the evening while Josh went off to do a briefing for his Son Doong tour we went to Bamboo Cafe for dinner. I had pork and veg kebabs with barbecue sauce on and chips, Captain Caveman had a Shepherds pie and Tatas ordered vegan soup from Veggie box which they brought over (it’s owned by the same guy). The food was really good and I noticed they had added more new dishes to the menu since last year too. I also had a couple of glasses of white wine which were palatable before heading over to Phong Nha Underground for a lovely, more expensive wine. 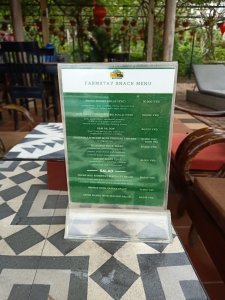 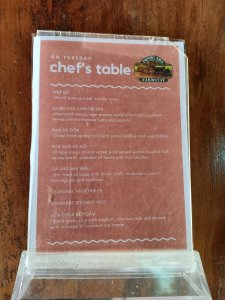 At Phong Nha Underground on Wednesday 5th February I decided to try one of the smoothie bowls but with a few changes to make it gluten free. It had banana, peanut butter, coconut flakes and chia seeds in and tasted fine but I’m not sure I’m cut out for smoothie bowls. Captain Caveman had a tomato dish with egg and bread and an espresso then we cycled to the mechanics. Bluey, my bicycle, had been suffering with a chain problem since before Tet and we had promised to get her a new one after the holidays. We left her there and had a wander to Funny Monkeys for a drink. While we were there it started raining but not for long and we had our rain jackets with us. We walked in to town again and went to the ‘Thang Nhung, the best spit roast and pork noodle shop in the world (probably)’ for lunch where I had BBQ pork, rice and greens and Captain Caveman had pork noodle soup.
When we went back to collect Bluey she was covered in greasy black hand prints but she was working so much better – she was really whizzy to ride now plus it only cost 80,000vnd too (less than £3)!
For dinner I welcomed a night on my own while Captain Caveman was at his briefing. I chose Chao Vietnam where I tried the dumpling starter for the first time followed by the pork belly. Both were great and I was also served free peanuts with my wine so I was rather full after such a big meal. Nevertheless I still managed a drink at Momma D’s to finish the night off while Aussie Pete had a little snooze.

Captain Caveman went on his next Son Doong tour on Thursday 6th February for 4 days. I skipped breakfast but then ate crisps later on so the diet was going swimmingly! The weather was back to hot sunshine so I was pretty warm when I arrived for lunch with D-Dub at Lantern restaurant. I ordered the pork ribs which they claim are the best in town while D-Dub had a rice flower pancake with veg and tofu (he was still doing dry veguary). I have to admit the meal was excellent and really good value for money. For dinner I ate at The Villas with the girls and we enjoyed a nice bottle of wine (or two), great food and had a really fun but civilised evening.