From Dong Hoi to Phong Nha – the 1st weekend in July

The excitement for Veronika and I continued in to the rest of the weekend while Captain Caveman was on day 2 of his latest Son Doong trip! On Saturday 4th July I awoke to sunshine and nice views from my bedroom window of the Vinpearl hotel. I went down for breakfast extra early so that I could take advantage of one last Vinpearl buffet before returning to Phong Nha for the weekend. Veronika joined me a little later and it was a sure sign it was the weekend as the dining room was quite a lot busier than usual. My physio appointment was at 8am and then I came back and had time for one last bubble bath before check out. Veronika had already organised a car to pick us up from the Vinpearl and run a few errands in the town before heading over to Phong Nha Farmstay. We called in a couple of places and on our last stop at The Face shop we came out to the driver trying to help a western bloke at a bus stop. He was meant to be getting a bus to Phong Nha but, as it was lunchtime, he was in for a long wait. On hearing his British accent we offered to help and I told him to get in the car without even checking with Veronika. We had about 40 minutes to find out more about our new friend as we headed towards our next destination armed with a boot full of flowers, a cake and some birthday gifts.

When we arrived at the Farmstay staff were waiting to help get the items out of the car without Bich, who’s birthday it was, seeing them. They were also a little confused that we had managed to ‘pick up’ Keith from Grimsby on our travels. It had never occured to me that this might not look good to any potential gossip mongers, especially given Veronika was now known for propositioning married men!
Keith was peckish and so, instead of getting off to his homestay straight away, he decided to have lunch with us and a few beers. Bich joined us for birthday wishes and present giving and helped Keith get to his homestay, with plans for him to come visit the next day. I checked in to one of the original rooms where I was given a nice suite with a four-poster bed and 2 bathrooms, situated next to reception and up just 4 steps. It was a really nice room and I found it easy to walk to, I even had a stand-up shower without incident. 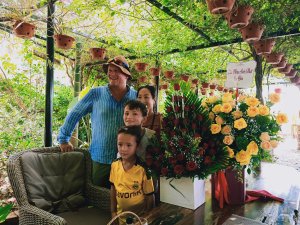 Veronika and I had dinner together with Bich and some friends however she was back on grandmother duty so was unable to get in to the wine as we had been doing in Dong Hoi. It was a low key birthday for Bich as the Farmstay was now getting busy and full at weekends but it was nice to see her relax a little. There was a Philippino band on who were very good, I ended up having a bit too much wine and managed to accidentally ruin a few of the birthday photos of Bich with her friends. Back in the room I lined up the bottles of water, brought to me by Sao because I can’t carry them, ready for if I had a hang over in the morning. At 10.30pm I called my parents and had a good chat – I was happy that they had decided against being the first to go to the newly reopened local pubs back in England.

Sunday 5th July was incredibly relaxing and I did hardly anything at all. My breakfast at Phong Nha Farmstay was pho ga, orange juice and green tea with lots of water. I chatted to a few people, had a rest on a sunbed and a dip in the pool. I ate lunch with Veronika and while she enjoyed the mushroom soup and quesadillas, I had the veggie curry with steamed rice which was really filling and tasty. Keith popped over in the afternoon and I met up with him after I had finished my Turkish lesson. He had beer and I had Strongbow as it was happy hour and then he had to leave his motorbike and get the shuttle bus over to Victory Road Villas. He ordered a pie which he took home with him while Veronika and I sat by the pool to eat our duck, risotto and veg with a bottle of our favourite sparkling wine.
Back in the room I saw a post from my old work colleague which upset me. My friend and ex supervisor, at a pub I used to work in, had posted a summary on Facebook of her observations from working in the bar the previous night. I was happy I wasn’t there right now, I felt sorry for the staff (my friends), as well as embarrassed and disappointed that some of the punters could not follow the rules to keep safe – it was very worrying.