On Friday 14th August I drank my stomach medicine and ordered pancakes with fruit and honey from Tree Hugger, it was absolutely amazing, great value for money and a good sized portion. For lunch I was really pushing the gluten experiment again by having another ham and cheese toastie from Tree Hugger which tasted fantastic and I had no side effects at all. At physio I managed to do all of the exercises, walking a little as well as going up and down the stairs, this time without putting my left hand on the wall so much. I needed to be able to get up the stairs at home in Phong Nha tomorrow so I was practicing in readiness because I would only be able to hold a rail on my right as our stairs are a lot wider than at physio class. Once back at the Nam Long Plus Hotel I made a video of me practicing walking and then ordered a celebratory steak dinner with red wine from 7th Heaven – it was as good as always and they even let me borrow a steak knife for eating it at the hotel instead of the restaurant. Tomorrow I would be heading back to Phong Nha where Captain Caveman and I had an exciting weekend planned. 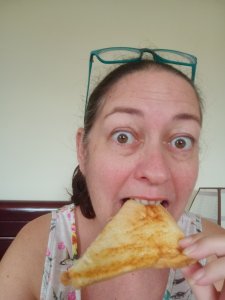 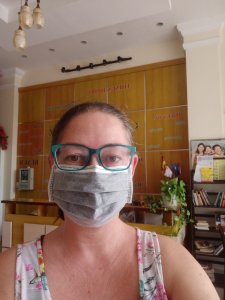 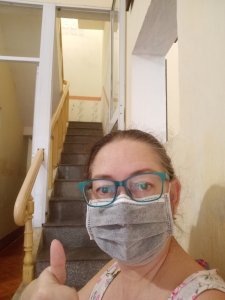 I was still in Dong Hoi on Saturday 15th August and, although I had tried to get a physio appointment in the morning, I was still booked in at 3pm. I didn’t bother with breakfast as I get bored of having the same things and because I was planning to have medication and gluten later on I was cautious with my lunch choice by ordering spring rolls and peach tea from Tree Hugger – delicious as always! My physio went fine and I was looking forward to being able to show Captain Caveman that I could walk a little when I met him later that night. I arranged to meet him at The Villas so that I could have some dinner and he could pick me up after his gala dinner at Chay Lap.

I got my usual Phuong’s Transfers back to Phong Nha and was dropped at The Villas just in time for a Happy Hour sangria, I had my stomach medicine and ordered my first pizza from the old Capture menu, now made at The Villas restaurant. The Showstopper is my all time favourite pizza which has a cheese base (no tomato) with blue cheese, prosciutto, fig jam and spring onion toppings – it’s so good and I couldn’t even finish it because it was massive and I took 2 pieces home. Captain Caveman told me 3 times he was setting off soon and I was getting a bit bored of waiting, I made a glass of red wine last ages so that I would still be able to walk and do the stairs at home. By the time he eventually came at 10pm I was over the surprise walking and was annoyed with him. I crutched to the car where he was really drunk and he let the driver get out to help me in. When we got home I crutched up the steps in to the house and then Captain Caveman went to put the lights on so I could walk to the main stairs. I had to get his attention to show him I could walk without crutches and he wasn’t as thrilled as I was, obviously. He saw me walk up some of the stairs but he was desperate for a pee and so went ahead, insisting he was just going to help me by unlocking the doors and put more lights on, of course. I decided to have another glass of wine when we got in and so Captain Caveman did too, by this time he was really slurring his words. The leftover pizza didn’t last long and we had a piece each with our wine – it’s just as good cold too. Hopefully Captain Caveman wouldn’t be too hungover for our plans tomorrow. 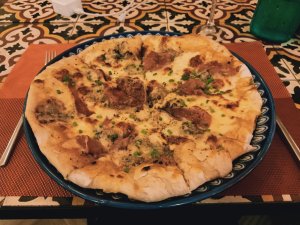 I was glad to have a day off from the physio on Sunday 16th August and surprised to see Captain Caveman was not suffering with a hangover. We checked in on the NCOVI app, as usual, before we headed off to The Villas for breakfast where I had pho ga, juice and a tea. We then carried on, by motorbike hired from Thang, on the longest ride I’ve been on since my injury (about 10km). We’d heard that there was a Sunday roast dinner with all the trimmings newly added to the repertoire at Phong Nha Farmstay, I’d even seen a video of the pork joint being cooked and I wanted to try it! I’d been told from a reliable source (Multi) that the gravy and crackling were top notch. Captain Caveman had planned a route along the river road so that we could maybe stop off along the way should I need to. I knew once I was on the back of the bike that it might be easier to just get to the Farmstay in one go rather than getting on and off as I was a bit uncomfortable and, if I’m honest, couldn’t get my leg over as easy as I used to.
We were doing well and Captain Caveman was driving slowly enough for me to not be in pain when we got to any bumpy bits however not too far after the last turn off to Sy’s Homestay we came to some resurfacing works where half the road was sectioned off with a metal rod, spikes and fresh tarmac. Unusually for Vietnam there was a sign with arrows showing to keep to the right which was at the back of a series of machines/tarmac rollers. As we went through the roadworks it became apparent that the sign had been put on upside down and we should have been on the other side and we were unable to stop or move over due to the metal and narrowness of the available road. I mentioned to Captain Caveman it was too narrow for us to pass the big machine without my crutches getting stuck and he quickly told me to move the crutches, which I did. I was just in time otherwise they would have got caught and I would have fallen off the back of the motorbike. My right foot felt a bit weird and I had sticky tarmac on my porter sandals so I asked if we could stop after Captain Caveman managed to get us over the other side and through to the end without coming off. When we stopped my foot rest had been pushed in by the tarmac machine, along with my foot being bent back a little – I wasn’t in agony but it felt a bit odd.
We carried on, driving past but not stopping to speak to, Bich as I insisted I just needed to get to our destination. We were lucky really as it could have been a lot worse and I felt knackered and extremely thirsty when I eventually got off. We went straight to the poolside and had a little rest before lunch, Captain Caveman didn’t say much at all. While he obviously had a pizza for lunch I had the fresh spring rolls and we arranged to meet Veronika and Ben for a little safari trip in the jeep later. After checking in to a lovely suite room in the main Farmstay building and putting my foot up for a bit to get the swelling down it was time to meet back up again.

The jeep safari was good fun, we saw lots of buffalo, cows and some ducks and it was the most adventurous thing I’d done in months – and I had the front seat.
Back at the Farmstay we had wine at the bar/pool and ordered the Sunday lunch with Veronika, it went down a treat. I’d taken my Gastropulgite as a precaution but then used it to eat a piece of carrot cake which was delicious. We had more wine and then retired back to our rooms, I called my parents and we had a good chat before bed.