I’ve chose this song as I’ve always liked a bit of Fatboy Slim and this particular track reminds me of the sound a train makes. I also think this version’s video is pretty quirky.

We left Mai Chau at noon, again by private transfer, and headed back to Hanoi. My mom and I both needed to get a new phone – I was still using my iphone 4s, which I’d gone back to when my 2 year old Oppo had decided that it no longer liked connecting to the internet.

We popped in to one of the Gio Di Dong shops in the Old Quarter and looked at phones while Captain Caveman popped to make a reservation for dinner at a nearby restaurant. After deliberating over different phones for some time we decided to both get the same and plumped for the Oppo A37.

Armed with a new phone with a pretty good camera we went to a rooftop bar for a couple of cold beers.

Dinner was at The Mediterraneo, near St Joseph’s Cathedral in Hanoi and was delicious. We even had free prosecco to celebrate their 25th birthday, had great food and a good end to that part of our holiday before we headed to the station for our overnight train. 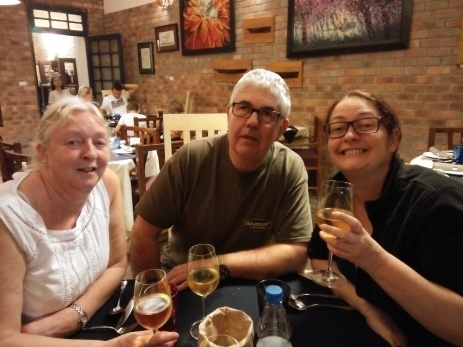 It was my parents’ first overnight train trip and we’d booked the soft sleeper so that all 4 of us were in the same compartment together. Captain Caveman and I had the top bunks while Ma & Pa had the bottom bunks. It cost around 500,000 VND each for the bed and the journey took about 9 or 10 hours.  I read for quite a bit and eventually went to sleep after midnight; my Dad had some dreams that caused him to shout out during the night which made me jump.  We arrived before 7am in to Dong Hoi, the nearest town to where Captain Caveman and I call home, got a taxi and arrived in Phong Nha by 8am. The first stop was obviously going to be breakfast, even before we had dropped off the luggage. It was going to be the start of a few days of being a tourist in my own village and I was looking forward to showing my parents the changes since their last visit, 2 years ago.

Me & Ma on the overnight train