It was only 10 weeks until Kerrie’s hen holiday in Marbella on Friday 6th March and my body was not the bikini ready I might have hoped for but maybe my new hobby would help. Nguyen Shack were advertising a yoga class where the first class was free for locals so me, Chrissy and Tatas decided to go along to the 10am session. We cycled to Nguyen Shack in Phong Nha and got a lift by car to Nguyen Shack Eco Resort which is so beautiful and built next to a lake. The yoga teacher walked us, a guest at the homestay and the owner, Maxime, to one of the bungalows so we could do the class on a balcony with amazing views. She was really good at teaching us the hatha poses where I found I wasn’t as flexible as I once was but it went quite well. After yoga we stuck around and had some brunch – I had beef and pineapple which was cheap and cheerful with a fair portion of meat in it. We lolled by the pool, looked at Bacon (the pig) and Donald (the duck) taking a few pictures and chilling out a bit.
In the evening Chrissy invited me to her’s and we had some wine before heading to the soft opening of the Phong Nha Eatery (aka Coffee Station) which was now doing evening meals with a very talented chef. The food was amazing and my duck in orange sauce really hit the spot. We tried the cocktails and got a bit tiddly, so much so that when we got home to find a herd of cows on our drive we stopped to take photos of them. 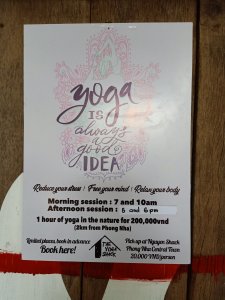 The weather was getting hotter and on Saturday 7th March we had our second yoga class outside on the roof of the restaurant at Nguyen Shack Eco Resort. Chrissy, Tatas, D-Dub and Maxime were all at the hatha yoga session where Chrissy and I had decided to sign up for the month. We all stayed for breakfast after the class and I had pho ga with fresh veggie spring rolls, while Chrissy d pancakes and poached egg sandwich. Tatas left for Dong Hoi and so Chrissy and I decided to call at Capture for a cold glass of white wine and some lunch. I got word from Captain Caveman that he was heading back early and he joined for a pizza while I had a gluten free salad (stilton, walnut, pear and lettuce). With Captain Caveman back he was desperate to eat curry at Namaste that evening so we went there, I ordered my usual bhuna murg with garlic rice – it was nice to have something more substantial. We were going to go home when I decided it might be a good idea to meet some friends who had gone to meet a Tinder date at Central Backpackers at the far end of town. We got there at last orders and managed one drink before cycling back home. Captain Caveman also had managed to intercept the date and make a new friend, who loves caves!

It was a strange day on Sunday 8th March in Phong Nha. Here they celebrate something called women’s day, although I’m not really clear how it is meant to differ from any other day. When I asked Tatas how they celebrate it she said that the girls go out for dinner and drinks which we arranged to do that night. I woke up to notice it was now less than 6 weeks until my visa expired and my plan to fly back to Turkey was still in place. Captain Caveman had gone off on a one day caving expedition to check out new caves but would be back that evening. Tatas couldn’t make yoga class as she was on a Hang Tien tour, two other friends were meant to join but had been drinking until the morning so didn’t make it. Chrissy and I enjoyed our third class and had breakfast and a lounge at Nguyen Shack then got the car back to town. I’d had a message from Captain Caveman to say he had returned early because they couldn’t find the cave and he was drinking by the pool at Victory Road Villas. It was a very hot day so I went to join him and had a dip in the pool, which was very refreshing. We took advantage of the happy hour (obviously) and then went home to get ready for the women’s day get together. Our women’s day celebrations took place back at The Villas with Tatas, Trang and Hoai joining Captain Caveman and I. The food was really good and I had a couple of glasses of red wine with my beef tenderloin. Captain Caveman was back exploring caves for three days the next day so we didn’t stay out too late.