This time last week I was looking forward to our first night out in a while but on Friday 24th April my ankle and knee would still not allow me to be that flexible. The leg looked better but still hurt and Captain Caveman was getting a bit peeved that I couldn’t get up the steps out of the bathroom without using tables to support me – I didn’t trust the crutches and by the time he would have got up to help me I could do it quicker. I checked the stats on Corona and although Vietnam seemed to be doing extremely well at preventing cases and deaths I was starting to get a bit cheesed off at some people not taking it seriously in other countries. Vietnam had 268 cases, Turkey was on 101,000 cases and over 2,400 deaths while the UK were on 138,000 cases and 18,000 deaths.
For breakfast I had rice crackers again, which Captain Caveman assured me he had checked for ants, but I had to send them back for ant removal as they were still covered in them! After triple checking and Captain Caveman admitting he didn’t thoroughly check because he likes ants, I ate them with cheese, gherkins and a pot of oolong tea. It was Des’s birthday and I felt bad that I wouldn’t be able to get out to celebrate with him at Momma D’s quiz night. I did more writing and learning Turkish then Captain Caveman decided he was having Lake House pizza again for lunch. I decided because they were on special offer to have the topping off the Hawaiian but to not eat the base and Captain Caveman had a meaty one and some of the Hawaiian.
In the evening it wasn’t great weather and Captain Caveman said he didn’t want to go to the quiz but I knew it was because he worried he wouldn’t win it without me! Instead we had a takeaway from Namaste, which was as impressive as usual, then we watched something on Netflix but I have no idea what and probably fell asleep. 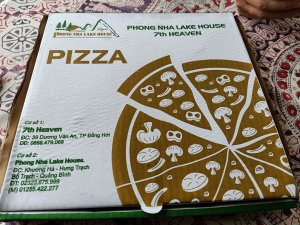 It had now been a week since I had drunkenly fallen and injured myself during our first night of freedom after ‘lockdown’. Saturday 25th April was a fairly lazy day for me, but aren’t they all now. I had 2 rice crackers and 2 laughing cow cheeses with water for breakfast as Captain Caveman had to nip to Oxalis for something. I wasn’t capable of transporting a cup or pot of tea so I missed out there. I did the RICE process for the leg and some Turkish lessons before Captain Caveman returned and we had leftover Indian food for lunch.
The Vietnamese authorities had released Directive 19 which now explained how the whole country would continue to conduct itself through the pandemic. I’d managed to not look at the data until later in the day but it was not good news back home. I had a Facebook call with my parents and it was funny to see how much their hair was growing and although they had strictly being adhering to the #STFAH rules they had some amusing stories to tell and it cheered me up. The cleaner came, a day later than planned, and was touching my foot to see what was wrong with it – she speaks no English and she just kept chatting on and shaking her head. Captain Caveman managed to pop out somewhere, probably for a few beers or to get me some snacks.
In the evening we had a marvellous dinner from Phong Nha Underground where I tried the beef stew with garlic potatoes and it was spot on. We decided to watch a couple of episodes of the second series of After Life with Ricky Gervais in. It was brilliant and instead of crisps and sweets I ate some dried mango that had been in the fridge for ages – it was the first time I’d tried it and it was pretty good. 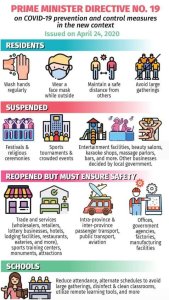 Sunday 26th April was a bit more lively (luckily for you readers who must be getting bored especially as, by now, I was meant to be flaunting my after lockdown shenanigans to all of you who are still stuck indoors). I could see where I had hurt my leg a bit clearer now, I was able to touch the sore bits and what I had overlooked is my toe, where there were the two cuts, it was very fat and I think I had broken it. I managed to have a lovely breakfast which I had ordered ahead so that I would definitely get a pot of tea with my rice crackers and laughing cow.
Vietnam had 5 more recovered Corona cases and I didn’t bother looking at the rest of the world data. As it was Sunday we thought a nice BBQ chicken with sticky rice, from East Hill, for lunch would be just the ticket and I was still eating it when it was time for the family zoom call. It was a good catch up again and I liked listening to the funny stories with Captain Caveman, his brothers, parents, sister-in-laws and nephews and niece.
Momma D’s was having a Cards against Humanity night with pizza which I would have gone to if I could but instead we had another zoom call with some of the Berlin 10, which was really good. Afterwards we watched more After Life and I iced my foot with a super cold can of Twister.
In summary it wasn’t a bad weekend and a good job I’m used to occupying myself.

joloyolo Originally from Sheffield, England. Can be found mostly in Phong Nha, Vietnam, or Dalyan, Turkey. Likes travelling, eating and drinking. Lives with Captain Caveman.
Published May 3, 2020May 3, 2020