On Friday 12th June we got a car in to The Villas (aka Victory Road Villas) for breakfast. It was 8 weeks since the day of my ankle and knee injury and although I’d made some progress I was still unable to do stairs and was so slow and incompetent with crutches. Captain Caveman had already joined an American caver’s breakfast table and was being passed the menu by the time I got to a seat. I ordered pho while Captain Caveman and Tatas had one of the massive breakfast options available – those sausages looked good! I had a swim and it was so hot that even the 32°C pool cooled us down. Veronika arrived so I went inside to join her and enjoy the Aircon. I ordered a burger (no bun) for lunch and it was really nice, there was even beetroot on it. My usual favourite is the confit duck leg but I decided to be adventurous for a change. We didn’t stop for Happy Hour this time as Captain Caveman had to get to his Son Doong briefing and I was tired, so we got a taxi back home.
I had strawberries and gluten free biscuits for dinner, did my Turkish lessons and had just one glass of red wine later on. 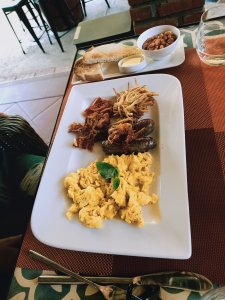 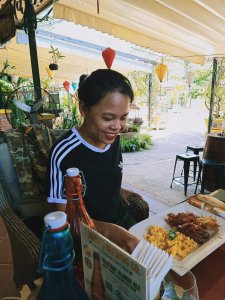 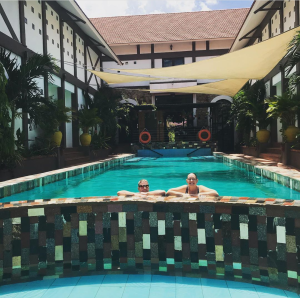 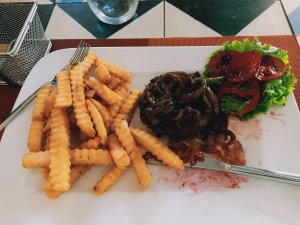 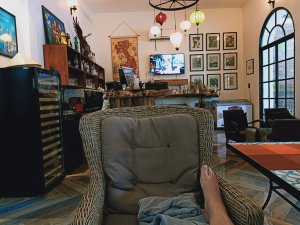 Saturday 13th June was pretty tame, after Captain Caveman left for his next Son Doong tour. His alarm was set for 7am and mine for ten past so that he could get all his preparation jobs done before he went. There was no longer hot or iced tea being made as he had tired of that job already but I could live without tea quite easily. He was ready early but decided he didn’t fancy doing the washing up. I was a bit miffed by this given 2 items were his, two were shared and only 1 (a wine glass) was mine. When he’d left I was determined to wash them myself and so I used a drawstring cotton toiletry bag to put each item in to carry them about. I only managed the glasses because I couldn’t pick up the bowl off the floor yet but it took me 45 minutes in total and I was exhausted.
I had a late breakfast of cheese and far too much fruit and then suffered a bad stomach which didn’t bode well for my evening entertainment. For lunch I had plain chicken and crisps then decided I felt well enough for a dish full of strawberries (which was a mistake).
I watched Tiny Houses on Netflix, did some Turkish and some writing but was unable to make it to a party at Ho Khanh’s. As I didn’t feel well I was in bed nice and early and enjoying having some relaxation.

If you thought Saturday’s update of me managing to wash 3 glasses was exciting, well you’re in for a treat on Sunday 14th June.
I had one of those days where I did hardly anything! I had make-do food, mainly because of my stomach still being a little delicate and us having an awful lot of strawberries to get through.
I checked the Corona virus data, as I had been doing every day, and the summary for the week was as follows: Vietnam had recorded 4 more cases in a week (all on flights back home to Vietnam, who were quarantined on arrival) and 16 had recovered, making a 96% recovery rate.
This week the UK had recorded a further 7,100 cases and 1,200 deaths which to some people back home was being perceived as getting better – it was less numbers than last week but I wasn’t convinced of an improvement. Turkey had 4,000 new cases in the past week and 200 deaths.
I’d got in to a Netflix series called Cabins in the Wild which was really good and then I was in bed early, watching Filthy Rich, the documentary about Jeffrey Epstein. I’d enjoyed doing nothing and I was looking forward to the coming week, tomorrow I was taking myself off on a little trip.