Even though Captain Caveman was in the cave I had set my alarm for 7am on Monday 15th June because a busy day was in store!
Firstly I was off to the physio and had booked Phuong, the driver, to take me so that he could help with translation too. I decided it would be a good idea to take my hospital letter which gave a description of the tests carried out and the list of damage I had encountered. Unfortunately I had stood my crutches up against the cupboard to do this and one fell down, hitting the top of my bad foot – it hurt but I didn’t have time for tears as the car was here early.
The physio was an eye-opener; it was quite a basic building and the doors and metal shutters were shut to make it look like it was closed but inside it was a hive of activity. Phuong helped me up the steps and into a side room where I explained what had happened and she read the letter. It was very hot and stuffy in there and even though I saw there was Aircon installed, it wasn’t on. The woman in charge, Thuy, appeared to speak no English so Phuong translated the best he could and we managed to ascertain that I would need to book in for a session of 1 hour per day, 6 days per week for between 10 and 20 sessions at a cost of 300,000 vnd each (about £10). It was agreed we would start on Wednesday and I should be flexible on timings as she would know more once she got started on me. Everything discussed seemed to come down to fixing the knee and she examined me then popped on a compression type knee bandage. I asked if it was ok to be swimming and she said it was and to also practice walking but to still rest too. We thanked her and got back in the minibus which had great Aircon and cold water. Phuong explained it would be cheaper to stay in a cheap hotel than to get the return taxi fare of 600,000 vnd (about £20) everyday and so I made a note to find somewhere cheap and cheerful but with accessibility, I even asked on a local Facebook group for recommendations.
For lunch I met Des at Tree Hugger and I treated myself to an iced chocolate with soy milk and a fruit salad with yoghurt and honey. I was missing not being able to go up the stairs of Tree Hugger to have a browse of the gifts they sell in the shop upstairs but I was able to get in and out much easier than on my first visit. The staff are always great and were extra helpful, making sure I had room to get seated and a couple of fans pointing my way. On the way back to Phong Nha I was feeling optimistic about embarking on the physio and hoped I would be done in a couple of weeks! I think I may have drank too much of the complimentary tea because we had to stop as I needed the toilet and there was only a nearby petrol station with a squat toilet which I thought I’d be ok with – I got down relatively pain free but then I was stuck. I must have touched every available dirty surface, slipped on the wet tiles but not too far and almost got locked in there. By the time I got back in the car I was a hot, sweaty, juddery mess!!! It was a good job I was on my way to my next break away from home, back to Phong Nha Farmstay! 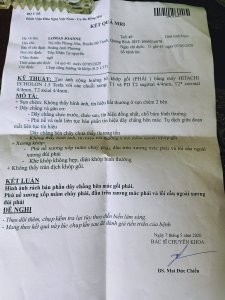 On arrival at Phong Nha Farmstay I got the very welcome cold towel given to me by Sao, who was the first of the staff to welcome me back. I was ready for some lunch and so stayed by the main pool and bar to tuck in to a very fresh chicken salad and a cold drink with lots of ice. I had decided that it would be a real treat to check in to one of the pool villas (from the new Jungalo Collection) and had been allocated the same one I’d stayed in before. I was happy about this because the bath was just right for my dodgy leg and I was familiar with the layout of the whole place. On entering the accomodation, Little Lies, I noticed that the decorative plates next to the fridge had been put up and a few more little improvements had been made. The (not so mini) mini-bar fridge was stocked with soft drinks, beer, cider and our favourite wine as well as lots of free water in glass bottles. I still wasn’t able to move glass bottles about so Sao passed me one and I also filled up a plastic one I had brought with me for when I move between rooms. 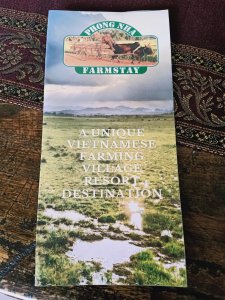 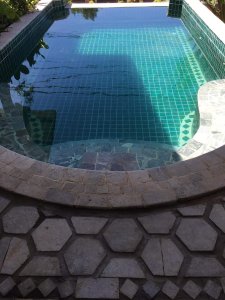 I spent the afternoon at the private pool, there were no guests next door so I was there all by myself and it was bliss. Around 3.30pm I was in the pool doing exercises when a storm came, the wind got up and the rain was heavy. I stayed in the pool and swam through the rain curtain that formed because of the structure of the open roof of the villa – even in rain the floor tiles weren’t slippy and the place was still a beauty.
A stay at Phong Nha Farmstay wouldn’t be complete without dinner with Veronika. We had the sparkling white wine which had already been chilled in the fridge before I arrived and we had a lovely dinner. I had a pork clay pot without the chillies and it was very good. I got to see the family but not for long with it being a school night and I didn’t need any encouragement for an early night either.