I had a day of complete luxury and relaxing on Tuesday 16th June. I woke up fully rested after a night in that amazingly comfy bed at Little Lies, I had a healthy breakfast of fruit and yoghurt at the side of the pool and then spent a lot of time in the pool. For lunch I had Nem Lui again which I really like and is a large portion – I had trouble finishing it all.
The afternoon brought some sadness when I saw a missile flying towards the window and then a thud. A sparrow had tried to fly through the door of the villas and was startled. I crutched over to it and saw it had open eyes but I couldn’t pick it up. I called Sao, her and the security guy came running, and she picked it up straight away and stroked it’s chest. Unfortunately it had already died so she took it away to make sure it got a good burial/send off.
Captain Caveman had got back from his 4 day tour to Son Doong and was off to his gala dinner that night but would be over after it had finished. Veronika and I made the most of our last dinner together, again having the lovely sparkling white wine (which Sao had already replaced in the fridge). We both ordered the chicken dish which was delicious – I really can’t find a bad meal here, but don’t worry I will keep looking!
I had gone to bed when Captain Caveman arrived as it was quite late and he’d already had plenty to drink with his customers at the after party. The size of the bed was definitely a bonus as I couldn’t hear him snoring! 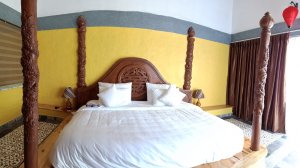