We had a wander down to the Farmstay’s pool and bar area for our breakfast on Wednesday 17th June. Captain Caveman had a fry up and I just asked for bacon and beans, which still came with bread, butter and salad. We made use of the facilities before check-out and then we came back to the poolside for our lunch. Captain Caveman had the duck salad and I had the fresh veggie spring rolls, both were great and I still had some left so took them with me. Phuong, of Phuong’s Transfers, picked us up and took me to the physio in Dong Hoi and Captain Caveman headed for second breakfast/lunch at Tree Hugger. At 47 years old I’m very lucky to have never had any injuries or serious health problems so I was unsure what to expect of physio in any country, let alone Vietnam. Thuy escorted me to the back room where I met Hoa who was responsible for the heat treatments. I laid on one of the mattress free beds while she put hot stones and a strange substance under and around my whole leg. I wish I’d not worn denim shorts because it was so hot in that room and I found it difficult to cope without drinking water that I had brought with me. The heat treatment itself made my leg throb and hurt more, the bed was so uncomfortable that everything ached and I found it difficult to stay still for the 40 minutes. I was happy that I got a pillow even if it was wet with sweat from previous customers. Once out of the heat treatment area I was taken to a back room, I found it hard to crutch through the narrow gaps between the beds of other patients and only just avoided standing on the mat of a small child on the floor. The room I got had a rotating fan and Aircon so I was really pleased – I was already drenched in sweat. Thuy dowsed my knee in talc and gave it ‘what for’, like I’d never felt before. It hurt and I had to tell her which bits were small pain and big pain as she gave me what was probably a deep tissue massage. Towards the end of the 3.5 hours of being in there she got me to try to push with my leg against her arm, my muscles had deteriorated quite a bit and I found it too difficult. When Captain Caveman and Phuong came back for me they still had to wait a bit longer and then she explained it was going to take a while but to come everyday and not stop until I was fixed.
I got back in the minibus and was knackered, I couldn’t wait to get home, have a shower and go to sleep. We decided to call at the Pepper House to see if Multi had spare crutches we could borrow as Captain Caveman thought I would be better with some lightweight ones which don’t hurt when I drop them on myself, we were in luck although I didn’t try them. On the drive back Captain Caveman decided he could drop me at The Villas in time for happy hour as he had to go meet his friends who were visiting from Sapa. I reluctantly agreed, seeing as I was hungry (as well as smelly and very dishevelled) so he messaged Caroline to say to meet us there. We went home and just dropped off our bags and my old wooden crutches, I stayed in the car, then went back to the The Villas. 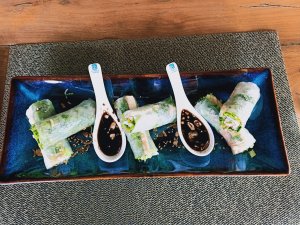 When I got out I couldn’t use the new crutches and could hardly walk, Captain Caveman had already gone to Lucky Lucky, so I struggled over to the nearest seat by hopping and shuffling. Caroline and Ha were drinking white wine and I ordered a margarita and some popcorn, the girls also ordered margaritas.
Captain Caveman came back with his friends just as Manu was giving us all some over-proof rum to try and we managed to get me up the ramp to a dinner table. I had the confit duck leg (my favourite) and I kept to my 2 margaritas as that was enough without dinner yet. We had a good night but we didn’t realise the time until we tried to get a taxi at 10:30pm, it was too late. Eventually we did get one but I was really worried as I could not have walked 2km with my new crutches. 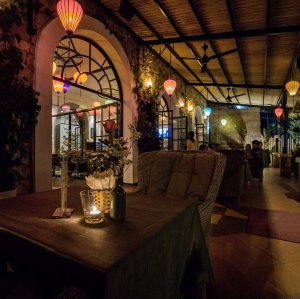