The Vietnam news first thing in the morning on Friday 31st July said there had been another 45 cases of Corona reported. This brought the total of community cases since patient 416 on 25th July to 93 – this was a lot in just 6 days, with the majority being in Danang and connected to the hospitals. Of course I was staying at home, minding my own business and worrying about not being able to go to physio and it setting me back on my progress (how selfish of me). I had finished all of my Gastropulgite and wasn’t able to go and replenish stocks so I had to avoid gluten again now but we didn’t have much choice in for breakfast. I had some of Captain Caveman’s sweets and didn’t notice until I was on my third one that they were full of dead ants – I ate them anyway, there was a second wave of a pandemic out there!
Finally the storm came and the room started to cool significantly, I was so happy and even took a video. News came that the first Corona related death had been reported, a 71 year old man from Hoi An who had underlying health problems. This was a massive knock for Vietnam as even the bloke from Motherwell had managed to live through it.
Captain Caveman came home and we had cheese and crackers for lunch with pickled onions and olives. In the evening we were lucky to be able to order the amazing chicken combo from East Hill. It had been ages since our last one and I had missed it. We also shared a bottle of red wine from the stash we had bought from the Farmstay and had a nice relaxing evening. By 8pm my stomach medicine was well and truly out of my system and I wasn’t feeling too lively. Captain Caveman shared his schedule with me and he still had 5 Son Doong tours in August and said he would do as many as he could fit in – we did need the money to pay for my taxis, hotels and physio! Before bed news of the second death came, a 60 year old man from Danang who was already sick with other conditions! 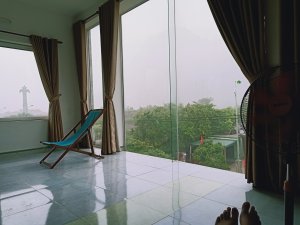 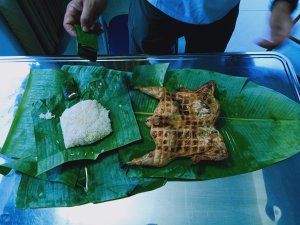 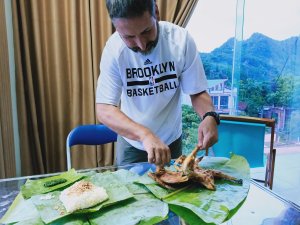 It made a refreshing change to have a couple of days off and we spent Saturday 1st August at home, eating nice food and drinking wine. For the Corona data Vietnam were on a total of 546 cases, 2 deaths and 373 recoveries – 68% recovery rate. In just 1 week the virus had spread significantly in Danang which was on lockdown and there was mass testing in that city. The UK totals were showing at the start of the month as 303,181 cases and 46,119 deaths.
We took advantage of The Villas doing a delivery service, it was wet out but certainly not the 10 day deluge we were told to expect. Captain Caveman had a pizza (obviously) and I had the potato, artichoke and edamame salad (without tomatoes) and spring rolls for lunch, we also ordered a tub of popcorn! We had a cheeky bottle of red wine and then anticipated what we might have for dinner. I’d missed eating duck of late so we both ordered the confit duck dish from The Villas and it was brilliant. We were contemplating opening another bottle of wine when the power went out and we used Captain Caveman’s inflatable emergency light so I could see to polish off the remains of the wine before going to bed. It was my first time crutching in the almost darkness and I managed it without incident. 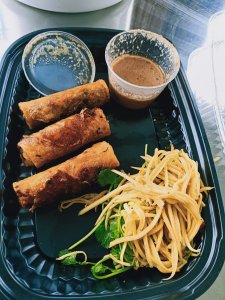 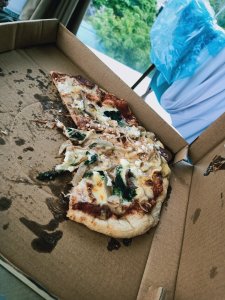 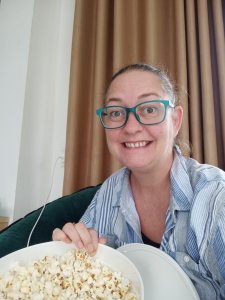 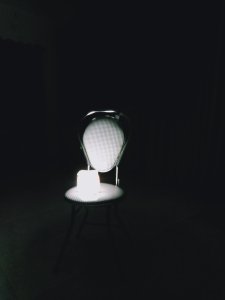 When I woke up on Sunday 2nd August I read there had been another Corona death bringing the total in Vietnam to 3. There had been 32 more cases and no more recoveries which meant the recovery rate was only 63% and still no news on where the new wave of the virus had come from. We had a late breakfast of cheese, rice crackers and pickles before Captain Caveman amused himself on his phone and I did some blogging. The weather was much cooler and a bit rainy which was welcomed and I even had a shirt on because the room with AC at 26°C felt nippy. There was a wedding in the village however we decided it was better for us not to go just as a precaution, having been in Danang for a few hours 14 days ago.
For dinner we ordered East Hill chicken again and we had a bottle of cava with it. I’d thought it wasn’t going to taste too good as we had got it really cheap but it was fantastic and we made a note to try to find more – cheap, drinkable wine is hard to find in Vietnam. 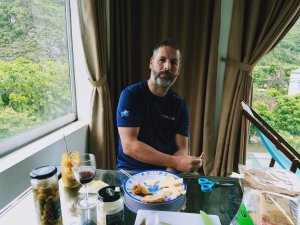 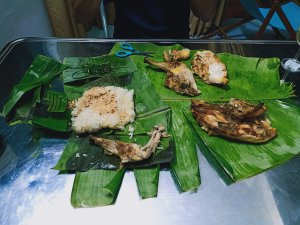