After hardly any sleep on my first night back home I was a bit crotchety and already missing Phong Nha Farmstay and its luxurious Jungalo Collection pool villas. On Tuesday 9th June Captain Caveman didn’t seem too hungover but he was obviously desperate for coffee. He headed off to Coffee Station to meet Caroline and Ha so he could have espressos and Eggs Benedict while I had peanut M&Ms for breakfast. Later I fancied a snack so we cracked open the cashews which Captain Caveman had bought in Dong Hoi, only to find they were garlic and chilli flavoured and not edible. 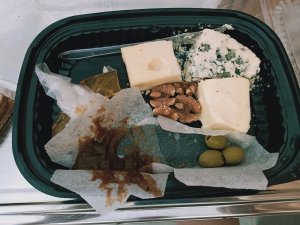 We invited D-Dub over for dinner and were ordering East Hill chicken but they didn’t have any available (disaster) so we decided to order from Capture café. I had an amazing cheeseboard (without bread), D-Dub the falafel with humus, pitta and Greek salad, Captain Caveman obviously had pizza and we had mangosteens for dessert. We had a lovely evening with the boys having gin and tonics while I had a couple of small glasses of red wine.