Our Christmas day fell on a Wednesday so it was a day for dogging, we got up early had bacon sandwiches and walked up to the shelter where we walked as many dogs as we could in the time we had. Hilary asked me to walk a small dog called Sandy who had been hiding since he got there and had never been taken out – he was shy, nervous and extremely cute but we had to carry him out to get him to start walking. He shared his enclosure with the Spice Girls (Emma, Mel and Vicky) and after a short walk he was so keen to get back inside – most of the dogs are not excited to go back in unless there is food! Captain Caveman took photos of the dogs too and we had some really nice weather. We were in a bit of a rush for the afternoon events and, as you may expect, things did not go according to plan.
We walked back home, showered and then headed out to buy the rest of our Christmas dinner before meeting friends for a drink, which we were already late to.
Captain Caveman had done quite a lot of prep already and so my job was to buy a chicken to cook and prepare the chestnuts. When I got to the butcher’s they only had the big chickens left and so we ended up with a massive one for 52 lira (they are normally 20 lira). We put the chicken in and headed to meet the gang at Rock Bar for a couple of cheeky drinks and to wish them well for their Christmas. The sun was shining and it was nice sitting out with a cold drink.
Back home we decided that we would have the baked brie as a starter, Captain Caveman basted the chicken and we headed over to Lukka for a cheeky glass of wine. Lots of people were there enjoying a Christmas dinner or drinks and the sun was shining. Unfortunately a dog fight broke out between Nips and a rival dog and nobody could stop it – a workman in a truck, 2 shop owners and the bar man all tried and still the dogs would not stop! People eating dinner weren’t impressed and I sent someone to pull the dogs apart but unfortunately they got bit and came back to the bar bleeding badly. Luckily Captain Caveman had some Newskin at home and I went to get it while the bar owner, Mehmet, poured his best vodka on to the wound. I did well to manage to not faint at the blood and went to get a photo of the dog to report it to the shelter people so they could collect Nips and get him neutered.
Back home I cooked the prawns as another starter and popped the chestnuts and red cabbage on. Captain Caveman had done us a gluten free alternative to pigs in blankets which were dates stuffed with cheese and wrapped in American style bacon, which turned out to be the highlight of the day!
I enjoyed the Christmas dinner and the chicken was so tasty that I had to have more.
Our Aussie friends were arriving about 11pm but we were already done in, even though I’d only had one glass of wine with my Christmas meal and we never did open the prosecco which Captain Caveman had purchased for us. We let them know we would see them the next day and went to bed early leaving them to check in to Dalyance hotel. 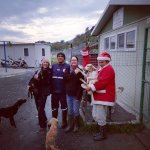 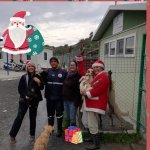