It was 9 weeks on Friday 19th June since my drunken incident which gave me my torn ligaments in my ankle and knee. I was still not mobile and was hoping a few weeks of physio would sort me out. Captain Caveman was off back in to the cave for 4 days and I was about to spend the weekend in Dong Hoi. I had gluten free biscuits and stilton for breakfast before Phuong, the driver at Phuong’s Transfers, came to take me to my appointment in his minibus. We went in to town a bit earlier and he dropped me at Tree Hugger cafe so I could enjoy a nice lunch. I had one of my favourite dishes of vegetables & beef with steamed rice and a peppermint tea – it looked great and tasted delicious. It was very hot in Dong Hoi and felt even hotter once I got in to the heat treatment room, the one fan was not doing much good as I lay on the hard bed in pain. I made a note to not drink tea before a visit ever again, after not being able to manage the squat toilet facilities and needing help from Thuy and Hoa. I think 3 hours is a long time to go without peeing when I’m meant to be drinking lots of water.
After the physio I went to the Nam Long Plus hotel where there was a surprise in store for me. It was Momma D who had decided to take the night off work and stay in Dong Hoi in the room directly above me. After a much needed bath a small miracle happened; I went to put my knee bandage back on and found I could completely straighten my leg on the bed, while sat up. I read on the internet (so it must be true) that a good test was to lay completely flat and see if I could get it flat in that position. I could, but the knee pinched a little and the toes were a bit odd, slightly stiffened. I went up to the 8th floor where there is a rooftop and Momma D was already there with a bottle of red wine. It was hot but breezy and the views were lovely, even though my photos don’t do it justice because I didn’t want to crutch about in the dark. The two of us decided we would splash out and get a delivery from 7th Heaven (one of my favourite restaurants) and eat on the roof of the hotel. I had 2 glasses of wine (that’s my limit with red wine these days), sweet & sour chicken with sweet potato fries and Momma D had spaghetti bolognese. Her food looked good and mine was very tasty and I wondered why I’d not had that dish before. It was a good night but I was yawning a lot as I was so tired after physio and was probably not great company. Luckily Momma D was too polite to say if she did notice me being a bit boring but I was not used to so much excitement in one day – how things have changed. Back in my room I set the alarm as I had an early appointment at physio on Saturday and I fell straight to sleep without evening switching off the light! 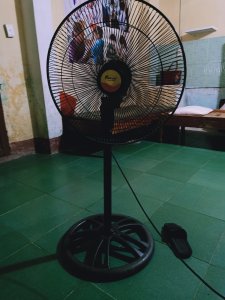 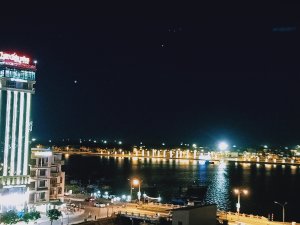 I went down to the Nam Long Plus restaurant area, in the entrance to the hotel, for breakfast on Saturday 20th June, where Momma D was already waiting for me. It wasn’t too early and I’d had an early night but I was aching after physio and still worn out. Momma D had shopping plans while I tootled off for more physio this morning. After the heat treatment Nam applied a lot of ice to my ankle and Thuy explained they didn’t realise how injured my foot was and so they would focus on both ankle and knee at each session.
When I got back to the hotel I was a hot and sweaty mess, Momma D was stood outside the hotel which was crowded with motorbikes, all in the way of the entrance. Luckily the taxi driver was helpful and helped me squeeze throught the gap and up the stairs to the reception area. Momma D had a rooftop bar which wasn’t going to run itself and so she had to load up her motorbike and get back to Phong Nha.
I went to my room and had a bath and had just popped on some fresh clothes when Momma D knocked on the door to say bye and donate some leftover wine, fruit and bubble bath for me to use up. The room was comfortable and it was great having a bath, especially as the hotel was only 300,000 vnd per night (approx £10). The staff and owner are also very attentive and polite so I was lucky to get great service at a budget hotel.
I decided on a late lunch from Tree Hugger and was impressed that the delivery food was as well presented and consistent with how they serve it in the cafe – I enjoyed my veggie spring rolls and french fries.
In the afternoon I did some walking up and down the room and the corridor, then chilled out until time for some Turkish lessons.
For dinner I decided to try 7th Heaven again but this time I ordered the pork ribs with side salad and veggie rice, all without chillies. When it came the veggie rice was the only thing not covered in chillies – even the salad had more chillies than is normal in a chilli con carne. The rice dish was excellent, I left the salad but managed to save the ribs from the sauce. I’m finding already that in Dong Hoi staff are not as used to catering for ‘no chillies’ as they do in Phong Nha – they still don’t get allergies here.
I watched a bit of Netflix and fell asleep early again – I was glad to be having a day off the next day. 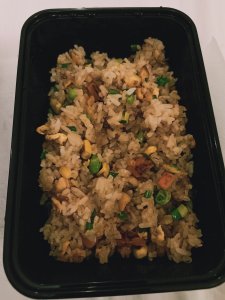 I had a later breakfast on Sunday 21st June as I didn’t need to be in a rush for anything. I had pho bo (beef noodle soup), green tea and fresh orange juice. I caught up on emails, practiced some Turkish and did some writing before I noticed that Marcella had a third series on Netflix. I binge watched a couple of episodes and was gripped but had to ween myself off it to keep moving so my leg didn’t seize up.
For lunch I had similar to yesterday because Tree Hugger is easily the best cafe and quite good on the budget for what you get. I opted for pork spring rolls and french fries this time and decided I would save some for dinner later. I really didn’t need 3 full meals a day because I wasn’t going very far.
Back in the UK it was Father’s Day which I had completely forgotten about until I saw updates on Facebook so I did manage to speak to my parents who were still staying at home, avoiding the Corona virus. They were pleased with my leg news of having being able to straighten it flat on the bed.
That evening I finished the weekend off with the rest of the red wine, kindly left by Denise, and another episode of Marcella before falling asleep about 10pm. 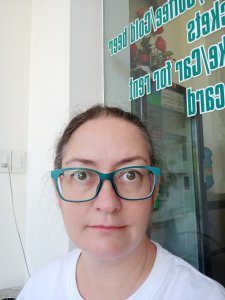 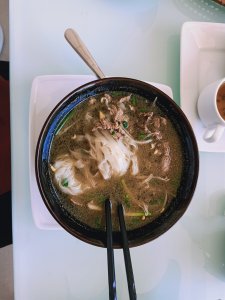