We had a hearty last breakfast at Le Domaine de Tam Hai on Friday 24th July and even as we packed our bags we were still heading for a weekend in Danang (at this stage not knowing anything about what was going to happen with the pandemic). I should have got up to see the sunrise with Captain Caveman but instead he went alone as I slept longer.
Captain Caveman had a few pages of Tyson to finish off and I was doing a bit of blogging, both by the pool, when we saw the news. Vietnam had reported no Corona cases in 99 days and today a man in Danang had tested positive for the virus! He was a 57 year old local man who was now known as patient 416, he was awaiting another test to confirm but, with less than an hour until our departure, it was time to change plans.
Captain Caveman sprang in to action (on his phone while on the sun lounger), cancelled the Danang hotel and booked us another in Hoi An instead. He let C know we now needed the car to take us to Gold Pearl hotel in Hoi An and we looked like we had been lucky once again. At first it seemed we may have been slightly overreacting given that there was just one case in Danang but the issue was that they had no idea where he had caught it from and we could take no chances – Captain Caveman had to work and I still had to go to physio.
We said our goodbyes around 1.30pm and I made my way to the jetty to board the speedboat while Captain Caveman grabbed the bags and C came along for support. The tide was in this time and I was a bit more nervous as I had to go sideways along a plank with wooden slats across it – it was a You’ve Been Framed moment waiting to happen! It took ages, Captain Caveman and the driver were a bit impatient, C was calm and helpful but I got to the floating raft and went on my bum. It was quicker and I could hoist myself on to the boat easier. Once on, everyone said to stay where I was instead of trying to walk inside the boat so I got soaked and hit a few times, on my good leg, by the plastic float which kept being flipped inside. When we got to the other side Hung, our driver was waiting for us, but there was no car ferry to use this time. I had to crutch in to the water and walk up the beach, avoiding a couple of rocks and litter. It took ages but I was impressed at myself, Hung was less impressed when he saw how much sand I had on my shoes and feet. With only a tiny amount of water left in our bottle after Captain Caveman had washed his feet I had to put mine in the car dirty. 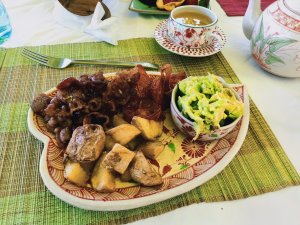 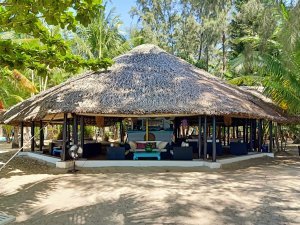 The drive was about 90 minutes and when we arrived at our Hoi An hotel it had more steps to the entrance than I would have liked and certainly wasn’t as wheelchair friendly as advertised. The room was nice although Captain Caveman had managed to book a twin room with a windowed bathroom (always a joy) but it had a lovely bath which I made use of straight away. 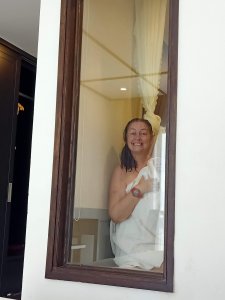 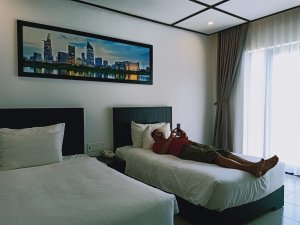 That evening we got a cab to Dingo Deli, given that walking street and the old town would not be suitable for crutching in, and I made an appointment at the salon a couple of doors down for a spot of waxing. At dinner we made a fabulous discovery in that they do gluten free bread (to order) and they have very good value red wine.
We had a feast and a most enjoyable evening, including a chat with the owner, takeaway fudge and a loaf on order for tomorrow! We had a rather busy day planned for the next day and quite frankly I wasn’t sure how I would fit it all in! 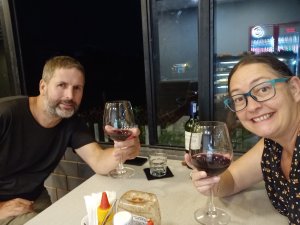 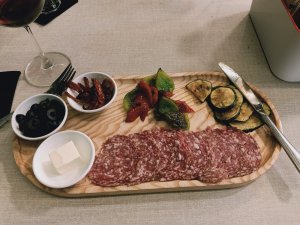 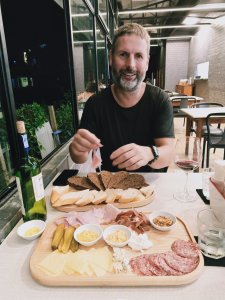 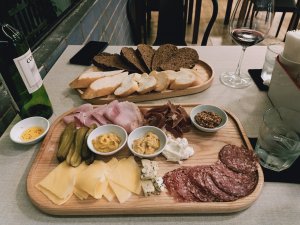