On the morning of Saturday 25th July we had a fairly early breakfast at Gold Pearl hotel, I had fruit, rice and sweetcorn while Captain Caveman had an omelette. I went to my appointment at Citrus salon where I was booked in for some waxing and Captain Caveman was in charge of collecting my gluten free bread and booking train tickets back to Dong Hoi the next day.
At the salon I was met by Le who was very nice but concerned I would have to go up the stairs (I’d half expected it) so she asked if she should move all her equipment downstairs to accommodate me better. As an almost professional bum shuffler now it was no problem getting up to the next floor and in to the treatment room, where I noticed one wall was made out of a huge mirror.
Le did a very thorough job, professional and at a good price too – I will definitely return! On my way down the stairs I noticed a lady having her nails done and she was looking at me. When I got to the seating area to enjoy an iced tea and some yoghurt the woman recognised me from my blog and introduced herself. Her and her husband, Neil, used to live in Dong Hoi until recently when they moved to Hoi An. She was called Julie and she seemed nice so we agreed to maybe meet up, with our other halves, later on in the day. When I got back to the hotel Captain Caveman thought my salon visit amusing and couldn’t believe the only other customer in there was now my new friend! I didn’t say much as I was too busy shoving warm gluten free bread in to my mouth – it was so nice and I just pulled it off the loaf and ate it dry. 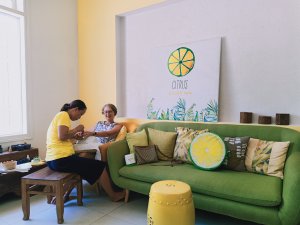 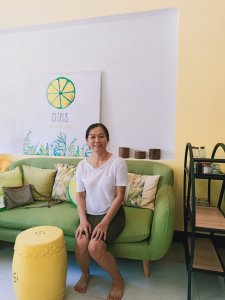 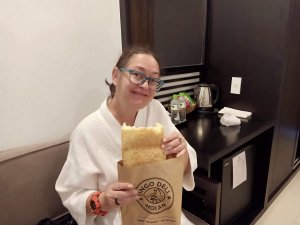 That afternoon we went to Kahuna’s which is on the beach and had an event with food and drink stalls and live bands on. When we arrived and I saw that it wasn’t great for crutching about, I was a bit worried but I persevered at the thought of food and drink. We met Des and Hanh, who already had seats and had saved us some space at their table. We bumped in to a few more people we knew and generally had a lovely day out. The pork ribs from Braai Pit’s stall were a winner and I definitely want to try their restaurant out. Captain Caveman was very attentive making sure I got what I needed and even escorted me through the crowds to the toilets when required – he even got me a cheeky mojito and brought a cute dog called Benji over for some cuddles. 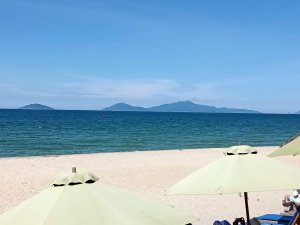 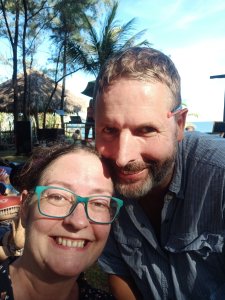 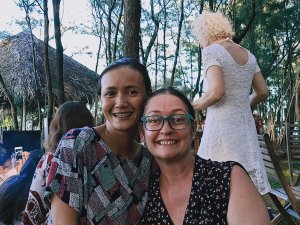 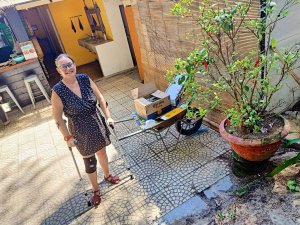 Later on, Julie and Neil arrived and we had a wine or two before all moving on to Bia Oi, Seamouse’s workplace, at An Bang beach. I was already tipsy from red wines and proseccos when Julie got out her bottle of white wine in a ‘beer only’ bar and asked Seamouse to go get a corkscrew and a couple of glasses. Another friend joined us and we shared some food and more drink. I tried a bit of cows tongue and it was surprisingly tasty but the cabbage dish was unbelievably good and not something I would have gone for if our chef friend hadn’t recommended it. I love the edamame beans and peanuts but to be honest you can’t beat a good sausage on a stick when you’ve had a few too many wines. The music was great too, a duo from the Philippines called Motamba who played and sang very well and we generally had a really good time – so good that when I got back to the hotel I was a bit tiddly and had a small stumble going up the entrance steps. I didn’t hurt myself but I did drop a crutch and then it took me ages to get to the room. 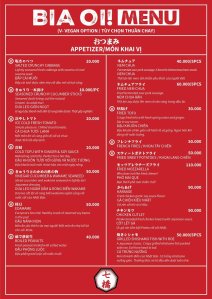 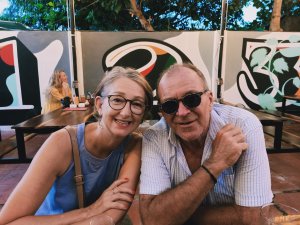 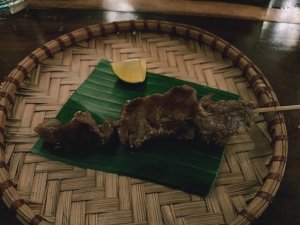 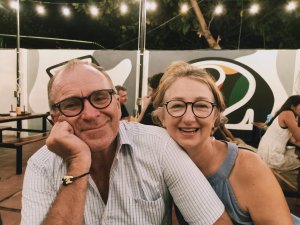 Photo credit to all attendees.